Every year Cyprus hosts the medieval and renaissance conference, Othello’s Island , in Nicosia. This year I was lucky enough to be invited along to exhibit some of my work. The conference is held inthe Centre of Visual Arts and Research (CVAR) in Nicosia’s arty district. Here Dr Rita Severis curates an interesting collection of Cypriot artefacts and hosts educational events.

My involvement started a couple of years ago when I helped with Dr Gaie Burnet’s paper on Simone Martini’s lost predella. Gaie presented this paper at conference and included my sketches along with other paintings of a medieval nature.

The exhibition features a mixture of medieval rooms, Gothic machines and twenty of my saint renditions. Along with these, there were also a couple from the medieval tree series and two olde Twitter bird watercolours.

The interlinking theme in these paintings is the idea of the modern world through medieval eyes and the show illustrated 21st century devices displayed in a 13th century style.

This worked well with the various papers the academics presented, which included such topics as incorruptible saint’s bodies, bad boys of Shakespeare and a lovely piano recital by Richard Hull. 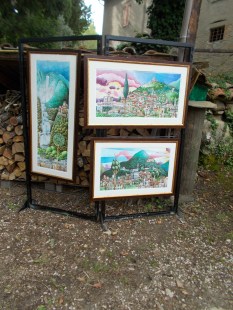 May 26th and 27th saw Artisti al Monte in full swing this year. It was great to join in and be given the opportunity to show off some new watercolours from the last 12 months.

Art in the community

It’s a time when the artistic community, around the village of Monte Santa Maria Tiberina, come together to raise money for the local infant school. This year there were 24 artists, craftspeople and artisans who, at various venues, put on displays for the public and then encouraged the public to come along and have a look.

Throughout the two days a good number of people made their way up into the hills in the shadow of Monte to see our works. Along with the artworks, Patrizia had layed on a delicious spread of cakes, tarts and drinks for our guests.

The weather was gorgeous, a warm sunny Saturday and a cooler, cloudy and somewhat humid Sunday. Sat in the shade of the trees meant this was the perfect spot to spend the weekend.

The peace between visitors gave me a chance to sketch, simple drawings of the things in my line of sight. A tree, bird box, large wine bottles. 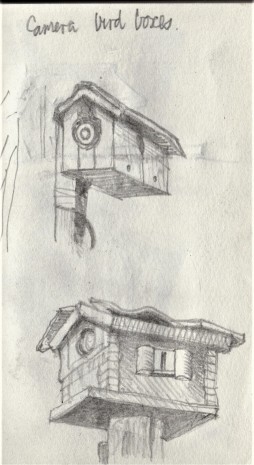 Lama Vecchia is high up in the hills, on a narrow, white road. Not inaccessible but people had to make an effort to see us. However, they were rewarded with breathtaking views once they arrived.

There was no WiFi signal, no internet and no phone calls, so it was an undisturbed afternoon of sketching, eating and talking to people. What more could you want on a sunny day in central Italy?

We had a great weekend at Artisti al Monte. I set my artwork up on the loggia at Valerie’s house in the beautiful Umbrian countryside. There were lovely views of the Aggia Valley all around, down to Sansecondo and the Upper Tiber Valley and on up towards Gioiello and Monte Santa Maria Tiberina. 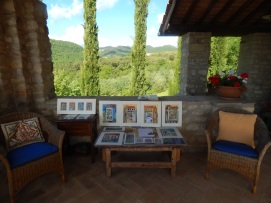 In total there were 29 artists dotted around the wonderful landscape where visitors could follow the trail to various sculptors, painters and craftspeople from the area. The largest collection was in Monte’s castle vaults but more could be found in the restaurants, guest houses and local studios.

I spent the weekend sketching on the airy loggia, chatting with our guests, while Valerie sat below making a ladybird mosaic and telling people all about the process. Everyone was really interested, especially the kids. 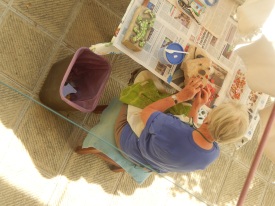 Fun for the kids

The committee had come up with the great idea of awarding a prize to the child who collected the most signatures. We had an endless stream of enthusiastic artist hunters coming through our doors. The serious side was to help raise funds for this little school to help with trips and equipment, it was fabulous to see the little ones joining in.

This is a wonderful way of bringing the community together and showing off the talents in the area. It proved to be a popular event with picnics arranged, family trips out and lots of people happily chatting in the spring sun. Now in it’s 5th year the Artisti al Monte continues to help the local school, show off its artists and bring people together. What more can you ask from a weekend?

Monte Santa Maria Tiberina (MSMT) will be hosting the 5th Annual Artisti al Monte event on the 13th and 14th of May, 2017. Neal will be taking part this year and will be based at Valerie Zanotto’s house in Pompeo. The turning for this is just past the village of Croce di Castiglione on the road to MSMT.

In total there will be 29 artists, sculptors and crafts people displaying their talents around the area. There are workshops and studios that are open to the public, there is also an exhibition in the Castello Bourbon in Monte Santa Maria Tiberina itself.

Not only are they increasing the awareness of the skills this part of Umbria has on offer, the event also raises money for the local school. This allows the children to take part in lots of cultural and social experiences.

If you’re in the area it would be nice to see you. 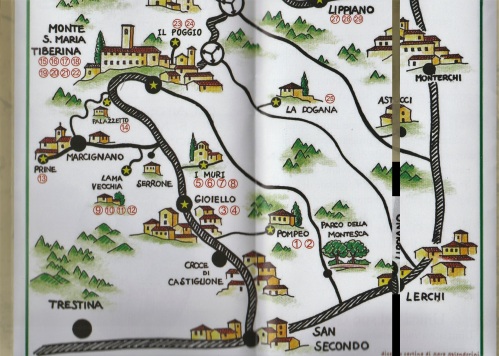 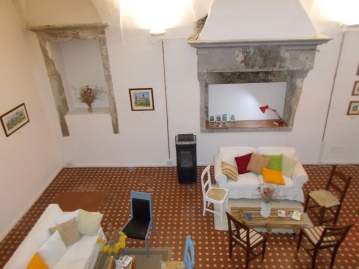 The visione di uno straniero mostra, (The Foreigner’s Viewpoint Exhibition) was held between the 9th and 24th January 2016, in Citta di Castello, Umbria. It proved to be a great success with a number of works selling, works commissioned and a good quantity of art prints sold.

Show in the snow

What was so very heartening was the sheer number of people who, on a chilly, snowy winter’s evening, made the effort to go out into the town centre. It was estimated that around 80 people come to the cosy surroundings of the ARTe Gallery to eat, drink and amiably talk.

During the week, several events were also arranged to encourage visitors to the show. These included a poetry reading by psychiatrists Tina Lepri and Helen Schick, with a lovely piano arrangement by Alison le Porta. Again there was a good turn out and those who came along had an entertaining evening.

Sunday, 17th January, myself and Mrs W hosted an afternoon tea gathering where we explained the history, culture and quirks of tea drinking in Britain. I was rightly assured that Italians are very interested in this strange British behaviour. It ended up as an apt event for a tea room, in which ARTe is established.

My initial skepticism was ill founded as around 30 people came in from the cold to hear me wax lyrical about Britain’s favourite herb and how it came to be so popular. Mrs W had also baked a range of traditional cakes and biscuits beloved by tea drinkers all over the U.K.

What I discovered from the exhibiting at ARTe, was that it’s a good idea to arrange other events to coincide with the show. This enables you to get more people through the door, gives additional reasons for promoting the art show and creates further conversations around the art work.

A simple selection of nibbles is guaranteed to bring the public in and something to entertain will keep the interest going. While you hope to sell the paintings, having small reproductions is also a good idea, as not everyone can afford the real thing but would like a memento of your work.

I would like to thank to all those who attended the event and especially, Daniela and Nicoletta from ARTe, Roberta from Lingua Piu, as well as Tina, Helen and Alison for their contributions, and Suzanne (Mrs W) for her unwavering support and enthusiasm.

As the exhibition date draws ever nearer I decided I had time for one last painting. However, what painting would complete the show?

In the end I decided that a street scene around the gallery would be an interesting idea.

I love the way old map makers, in the 15th century, fitted the streets and buildings into town plans, so I used an image of old Citta di Castello as inspiration.

The gallery is off the main thoroughfare and down a little side street that luckily links some of the town’s landmarks. It can easily be reached from the Duomo, the Civic tower and the Podesta, Castello’s old town hall.

Via Apollinare and Via del Popolo are normal Italian streets, lined with small, old churches and restaurants. The entrance to the market and a collection of shops can also be found here. Narrow, cobbled and brightly coloured, it’s similar to a thousand others all over the country but this one has the Tea Shop Gallery where the works will be on display.

The sky went through a number of permutations, fluffy, feathery and speckled, before finally settling on an abstract blue/purple swirl.

As the show is in a tearoom the idea was to create a sky that had the feeling of a boiling kettle or a steaming hot cup of tea. It was initially a pale blue but the tower was lost against it, so I tried a bolder approach.

Another difference is the total lack of green. Just for a change I made a conscious decision to leave out any green in this painting. Umbria is known as the green heart of Italy and my paintings are normally full of verdant tones. 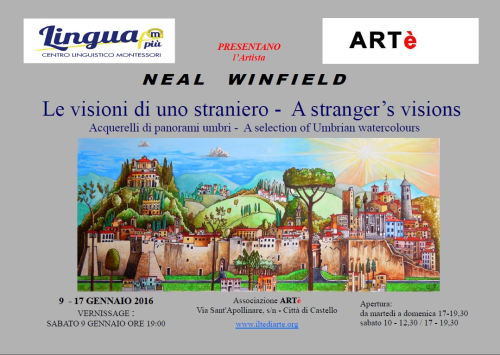 The ex-sacristy Sant Sebastiano is a lovely venue in which to exhibit art. It is an intimate and historic space, with the aromatic scents and  flavours of tea filling the air. There is a nice contemporary feel to it, blending the old structure and modern fittings.

As Lingua Piu have kindly offered to sponsor the show, it was thought that the inclusion of some additional cultural events would be good to increase interest in the exhibition.

So … the vernisage, opening night is the 9th January, on the Sunday night (10th January) the lovely, Alison Oldham will treat us to some live piano music. The following Saturday (16th January) there is”An Evening on the Couch” as psychiatrists Dr Lepre and Schick entertain us with poetry readings in Italian and English.

Sunday the 17th is “Tea with the Winfields” as Mrs W and myself will explain the mysteries of British tea traditions and history. I’m often asked about our tea drinking activities and so this is the ideal occasion to explain the best way to drink tea.

An enlightening trip through tealand, with the addition of some Victoria sponges, scones, Bara brith and cup cakes bringing an end to an exciting week.

If you find yourself in the Upper Tiber Valley or near Citta di Castello in the New Year, please call in and have a look around. Why not, grab a cuppa and five minutes break  in the town’s rapidly growing art venue.