The Journey to Sanctuary

The latest landscape painting sounds like it could be  a board game or the next film in a vampire franchise. The reality is that it follows the trip I’d been taking throughout August up Monte Corona, south of Umbertide, where I was staying at Prato di Sotto during the summer months.

The directions are simple and this picture, guiding you, has the feel of an old treasure map seemingly detailing, albeit in a slightly distorted fashion, the landscape of an earlier time. 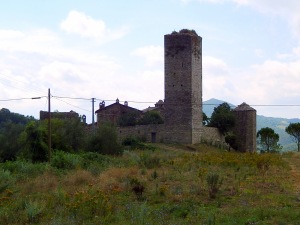 “Once you cross the bridge, make sure you avoid the monastery and travel up and around the hill. Continue down the road until you reach the iron bridge and the little cabin. Turn left onto the white road.”

“Follow this rough, stone trail for 4Km, past the houses, the wood piles and over the little bridge until you reach the picturesque medieval village. Do not turn right at the farm and head into the valley but carry on up the hill until you reach the B&B. If you push on further up the hill, you’ll reach the sanctuary of the hermitage of San Salvatore on top of Monte Corona. ”  GAME END!

The style still contains the elements taken from the Lorenzetti and Gozzoli frescoes but features more modern houses and bridges. The trees are purely influenced by these early Renaissance artists and copies that exploratory feel that their work possesses. 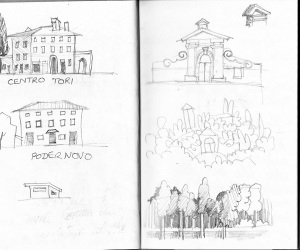 Once again I’m planning on having a dramatic sky, all oranges, pinks and purples but we’ll see how that turns out. At the moment I’m just struggling with how to paint a page full of trees and foliage.  Let’s wait to find out how it ends up shall we?

It’s always nice when you sell artworks but to sell a piece twice in less than 24 hours is special. It was just too late for Jeff who wanted my painting of Montone. However, after a meeting, a lovely lunch and a walk around Montone we came up with an idea for a new painting. 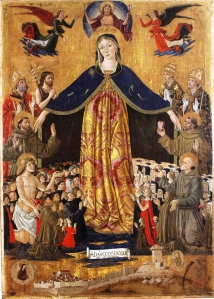 Jeff mentioned that in the local museum there was a medieval banner by the artist Bartolomeo Caporali. The painting of the “Madonna della Miscordia”, was completed in 1482 and beneath the canopy of the Madonna’s brightly coloured cloak there is an image of Montone.

The banner was used to provide protection against the plague and towering over Montone you can see a scythe weilding, Grim Reaper, getting ready to level the town.

A view of St Francis’ Church

There are a number of interesting features in the painting which after all these years are still present today.

Clearly visible is the St Franciscan church, the Del Verziere Gate and the clock tower. Although long since vanished is the crumbling remains of Braccio Fortebraccio’s fortress but many of the formidable town walls are still standing. 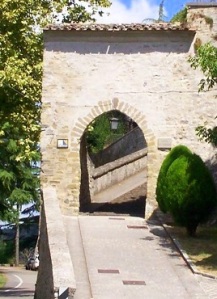 Whilst not represented in the original painting, the church at the bottom of the hill is dedicated to St Gregorio who is also the patron saint of the town. Having been built around 1,000 AD it would have been standing when Caporali painted Montone.

The fields and woods that populate the painting are not the exact replication of any particular view point. Instead they are taken from around the area and are fitted into a pleasing composition that captures the spirit of Montone’s landscape.

If you drive around the hillsides you’ll see the olive groves, the clusters of fir trees and ploughed fields. There are distant farms on the hill tops and the distinctive Monte Acute, behind Umbertide, is ever present.

I found it fascinating that an image of this picturesque  Umbrian town, painted over 530 years ago, still has many of the original features present. And that the landscape has a familiar feel to it. I wonder whether in another 500 years the scene will still be a peaceful and tranquil.